A series of articles that began at Podium Runner a year ago have now morphed into a scientific journal report. At Frontiers in Physiology, Romuald Lepers has analyzed the performances of 39 men and 1 woman (Joan Benoit Samuelson, of course) who have run sub-3 hour marathons in five consecutive decades, i.e., the 5DS3 runners.

Lepers is a French physiologist who specializes in exercise and aging. He has previously written about how lifelong endurance exercise slows loss of aerobic capacity, and about Tommy Hughes, the 60-year-old Irish marathoner who has been shredding age-group records the last two years.

Lepers’ new report concludes: “With consistent training and racing regimens, it is possible to limit the age-related decline in marathon performance to less than 7 percent per decade at least until 60 years old.” The 5DS3 runners lost just 64 seconds per year over nearly 33 years of marathoning. The Marastats.com website estimates that only four percent of all marathon runners of any age manage to break 3 hours for the classic distance.

That’s why groups like the 5DS3 runners are important. (They are also rare.) We get to trace the self-same individuals through their marathon careers.

The 40 runners in the 5DS3 group that Lepers studied included 11 who had run under 2:20 when young, and 3 who achieved a sub-2:15. However, the group also included several who started with times in the 2:40s or 2:50s and simply stayed close to their best performance. For 73 percent of the athletes, their PR came between the ages of 25 and 34. On average, the age for personal bests was 26.9 years.

In most cases, runners’ PRs came about five years after a first marathon in their early 20s. When they reached their early 40s, the runners were achieving times similar to their first efforts. Their rate of slowing down increased after the late 40s, as shown in this graphic. 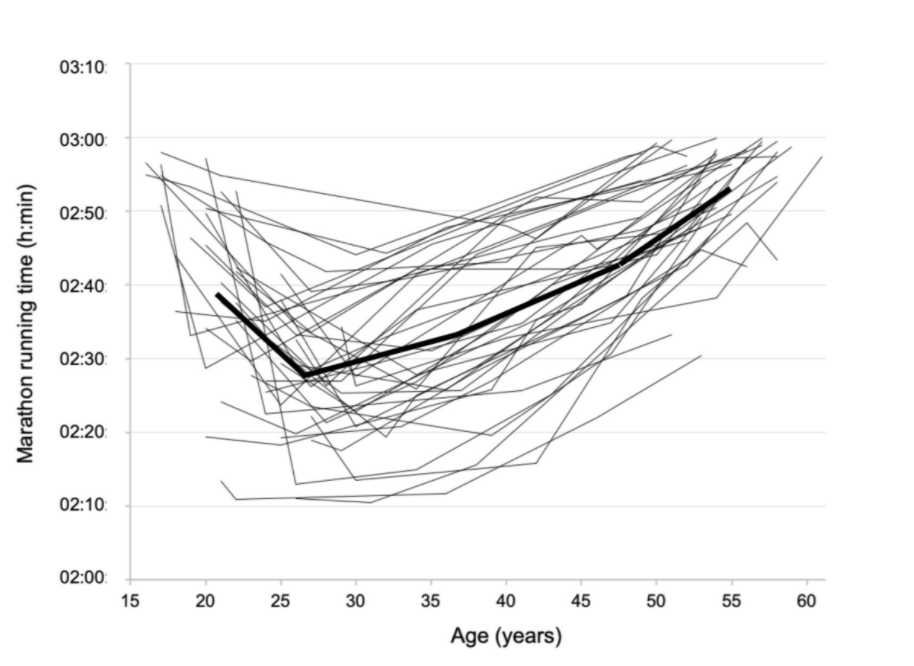 The runners in the 5DS3 group had an average of 32.9 years from their first sub-3 to their fifth. Most ran their first in 1978/1979 and their fifth in 2010/2011. Five have since notched a sixth decade by running sub-3 in 2020. We wrote about the first four last spring and summer. In September, Mark Murray joined them via his virtual Boston Marathon that was Strava measured-and-timed at 2:58:13 (26.23 miles) in Sacramento, CA.

In his analysis of persistent excellence, Lepers refers to several recent physiological studies of top age-group runners. Both Gene Dykes (the over-70 marathon record holder at 2:54:23) and Tommy Hughes, who recently ran 2:30:02 at age 60, had long periods of no running or minimal running in midlife. In fact, Hughes had a 16-year break from age 32 to 48 when he says he did no running. Then he came back with a vengeance, running up to 100 miles a week while preparing for his recent record-setting efforts.

Dykes and Hughes have both been tested in physiology labs, and their results published. Dykes here, and Hughes here. The reports showed that both were capable of running the marathon distance at an unexpectedly high percent of their VO2 max — at 90 to 93 percent. This implies that while aging runners will get slower as their VO2 max declines, they may continue to excel at the marathon because they can cover the distance at a high percent of their aerobic fitness.

Cyclists and swimmers decline at a slower rate than runners, at least in part because their sports remove some of their body weight. Running is quite literally a pounding, punishing activity by comparison. Few can retain a high training and racing level for decade after decade. That’s why we admire them, and hope to learn from them.

Leper’s concludes, in his best scientific tone, that it will be fascinating in the near future to see “if such a low rate of age-related decline in endurance performance can be maintained after 60 years of age.” For example, if Hughes loses only 7 percent in the next decade, he will run 2:41 at 70 vs Dykes’s current mark of 2:54:23.

Lepers answered several questions for us about his paper and about exercising through the decades.

What did you find most surprising or impressive about the 5DS3 runners?

“I had previously shown that one former Olympic marathoner, Tommy Hughes, had managed to limit his decline to about 5 percent per decade. The 5DS3 runners show that a larger, non-Olympic group can maintain their performance almost as well as Hughes — at about 7 percent per decade.”

“We do not know this for certain. They might get injured from their hard training when younger. But most likely it is a matter of maintaining a high level of motivation for many years, which is a challenge.”

Obviously, Joan Benoit Samuelson is quite special, and women should have an “equivalent target” rather than sub-3:00, perhaps sub-3:20. Do you think men and women runners age differently or the same?

“The sex difference in marathon running performance in elite runners is around 10%. The studies generally show that this sex difference increases with age. For example, Marika Yugeta is about 14.7 percent behind Tommy Hughes at the same age. But I don’t believe there’s any physiological reason why women should age-perform differently by men. I think it’s likely there are simply fewer women racing hard in the older age-groups.”

In your studies of aging endurance athletes, what are the key attributes–physiology, training, psychology, other? — that are required for success over 30-40-50 years?

“We’re learning that it’s possible to keep your decrease in vo2 max at about 5 to 7 percent per decade. That’s very important. And we’re also seeing that the best masters marathoners can run at a very high percent of vo2 max. We need to learn more about their running economy.

“Training is crucially important, and we don’t know much about how masters athletes change their intensity, duration, and frequency of training. Also, recovery is a huge topic. Most masters runners say they have to change their recovery with aging, but we don’t have scientific data on how to do this optimally.

“In the end, it all comes down to motivation. No one can perform at a top level without the motivation to train and race hard. They might be chasing personal records, or maybe world records. But they need very high motivation.”

Any thoughts about the risks of hard training vs modest efforts at an advanced age when chronic aging diseases become a reality for everyone?

“That is THE question: “How much is too much?” It is very difficult to answer. We don’t know if an older runner risks more heart disease or other health issues by training and racing hard. I have heard masters athletes say they will limit their activity if the doctor orders. Others feel that their exercise is so important to the life they have led that they will continue training anyway and face the risks. People make their choices in different ways.”

Read more about the runners who have completed a sub-3 hour marathon in each of the last 6 decades, and how they train and race, in our 6DS3 collection.

How Common Are Heart Problems in Athletes, Really?

How Common Are Heart Problems in Athletes, Really?