What you need to focus on when you don't have a race looming depends upon your goals, your history and your weaknesses.

When a racing season ends, it’s easy to dream of indulging yourself a bit and leisurely running before thinking about starting to train seriously for the next cycle. And, to be sure, recovery from intense training and racing is important. Chris Lundstrom, Head Coach of Team USA Minnesota says, “Training hard year round tends to end in a physical plateau, and loss of enthusiasm, which ultimately leads to decreases in performance.”

But after you do take a few weeks of recovery, it’s time to take stock of where you’re at as a runner, identifying weaknesses, and reflecting on issues from previous training cycles, says Eric Heintz, Director of High Performance for the Atlanta Track Club.

Then it’s time to get to work. Because the training you do now, during the “off-season,” is what will dictate how effective your next training cycle will be.

“The base phase is the most important phase of training,” says Olympian and personal coach Juli Benson.  Laying the groundwork now is vital to making sure that you’re prepared to handle the higher intensity of training down the line.

The most effective use of this time will vary from runner to runner. You may need to spend time working on building a mileage base, focusing on strength and mobility work, or trying to improve your pure speed and neuromuscular coordination. Spending some time on each of these areas is important for every runner, but the emphasis will vary depending your your goals, your history and your weaknesses.

The flow chart below will help you key in on which aspect deserves the majority of your attention this off season. Once you’ve identified what to focus on, check out the recommendations below for more details on why and how to incorporate it into your training. 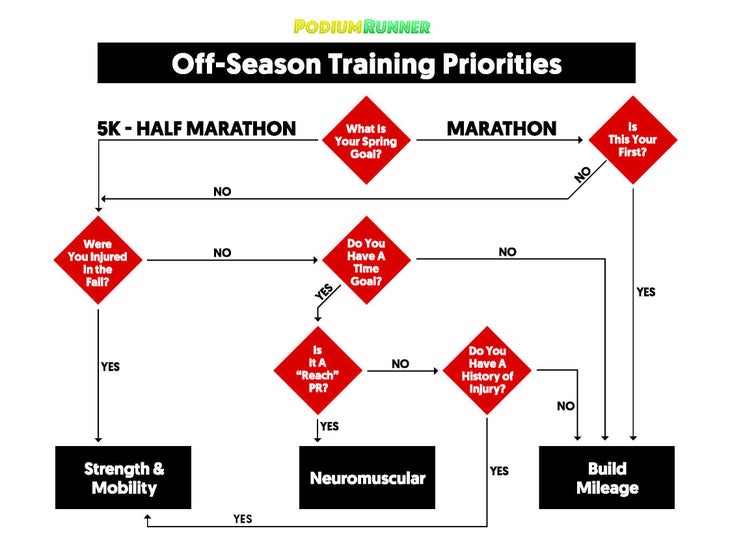 The term “base training” frequently brings to mind lots of high mileage running, and that’s with good reason, according to Benson. She believes that the base phase should be a time to focus on aerobic development and improving endurance. Improving endurance is important whether you’re bumping up to a longer race distance for the first time, or if you’re looking to improve times at distances you have experience racing.

In addition to building endurance, running more miles now will also translate to more speed later in your training since you’ll be able to recover more quickly between hard workouts, Benson says.

As much as you can handle

Heintz says that if your focus is on improving endurance, a good goal is as much mileage as you can without getting injured. It’s important to remember that what you can handle depends on what else is going on in your life and that a busy professional isn’t going to be able to handle the volume that an elite runner can.

Still, most runners can increase their mileage and see benefits from it, he says, as long as roughly 80% of your weekly mileage is easy running.

It’s also important to make sure that you have a plan when you’re increasing your mileage. Benson says patience and taking a gradual approach to mileage increases is vital to successfully building endurance during the base phase. This is why you need to start now, well in advance of your race, even months before your training plan begins.

She recommends increasing your long run one or one and a half miles per week and adding a mile or two per week to each of your runs throughout the week, as well. You can also gradually increase the number of days per week that you’re running throughout this phase.

Heintz says he disregards the traditional rule of limiting weekly mileage increase to 10% per week. “For low mileage folks, it adds too little per week and for high mileage folks, it can be too much,” he says. Like Benson, Heinz recommends increases of roughly four to six miles per week for most runners. Then make sure to take a down week that drops your weekly mileage 10-20% every three to four weeks.

If you need to improve pure speed more than endurance, the off-season is an excellent time to focus on neuromuscular work. Starting now will allow you to incorporate new drills and exercises without the accumulated fatigue of intense training, and will allow you to see improvements to your running economy before tackling the more challenging work ahead.

Lundstrom says that working on strength, power, explosiveness and general athleticism can all help lead to faster workout and race times later in the training cycle. You can use a variety of different options to work on these areas, including work in the weight room and plyometrics.

Benson notes that in addition to this kind of strength building you can, and should, include some faster running during the base phase. But when including fast running in this phase of the training, it’s important to make sure that you’re not feeling exhausted when you finish, warns Heintz. That means shorter reps than you’re used to and longer rests. The goal is to feel invigorated and refreshed at the end of the session, says Heintz.

Starting this work early will not only make sure that you give yourself enough time to really see the benefits, it will also allow you to progress slowly with the training, which is especially important if this kind of work is new to you. It’s also important to do the work on days when you’re not overly tired from your other training, so schedule it one to two times a week on an easy day, and do it only when you’re feeling a pop in your step, you’re excited about the work and have to hold yourself back from doing too much.

Focusing on strength and mobility work is especially important use of your time if you’ve been dealing with injuries that may be caused by underlying muscle imbalances or weakness. Ultimately, it’s consistent training that is important for progress, so taking the time before the training cycle to reduce your risk of an injury interrupting your training is time well spent.

If you’ve been struggling with injuries but are unsure of the root cause, Heintz recommends seeking out a physical therapist to take you through assessments and screens designed to point out any areas that may cause you problems when the training load increases.

Much like neuromuscular work, starting to incorporate strength and mobility work now is better than waiting, according to Kate Edwards, DPT OCS, the founder of Precision Performance in Atlanta. “In between training cycles is the perfect time to begin strength training in order to determine how your body responds to these new workouts,” Edwards says.

That means that you’ll know how much your body can handle before the training cycle starts. “The last thing you want to do is work so hard on your strength that your running suffers,” says Edwards. To accomplish this, she recommends doing strength work two to three times per week, post-run. Doing it after the run while you’re tired means that there is less chance of you overdoing it on the strength work.

Edwards says it’s also important not to drop your mileage too much in order to accommodate the new strength exercises. Keeping your mileage at its current baseline will let you accurately judge how much you can handle before you start to increase the training intensity.

Starting this work before you begin intense training also helps you better learn movements and drills that may be new to you and to progress them gradually. Given them time to take effect also means that you’ll get to see the effects of your strength training when you begin more race-specific training. And knowing that you’re a stronger, less injury-prone runner can set you up for your best training cycle yet.

From PodiumRunner
Filed to:

5 Essential Stretches to Do Before and After a Workout

Sex Differences in Running Are More Complicated Than We Thought