Short or Long Travel: Which Is the Best All-Around Mountain Bike?

How much slower does a modern long-travel bike climb? And what are the differences downhill?

If you want one bike to do everything, how much travel should it have? All bikes have to find a compromise between climbing and descending performance, and suspension travel is usually seen as a good indicator of where a bike sits on that spectrum.

Caught up in all this is the question of tire choice. How much of the difference in climbing speed between an enduro bike and a trail bike comes down to the tires? Can fast-rolling tires close the gap? And can sticky tires make a short-travel bike descend as well as a long-travel one? Let’s find out. 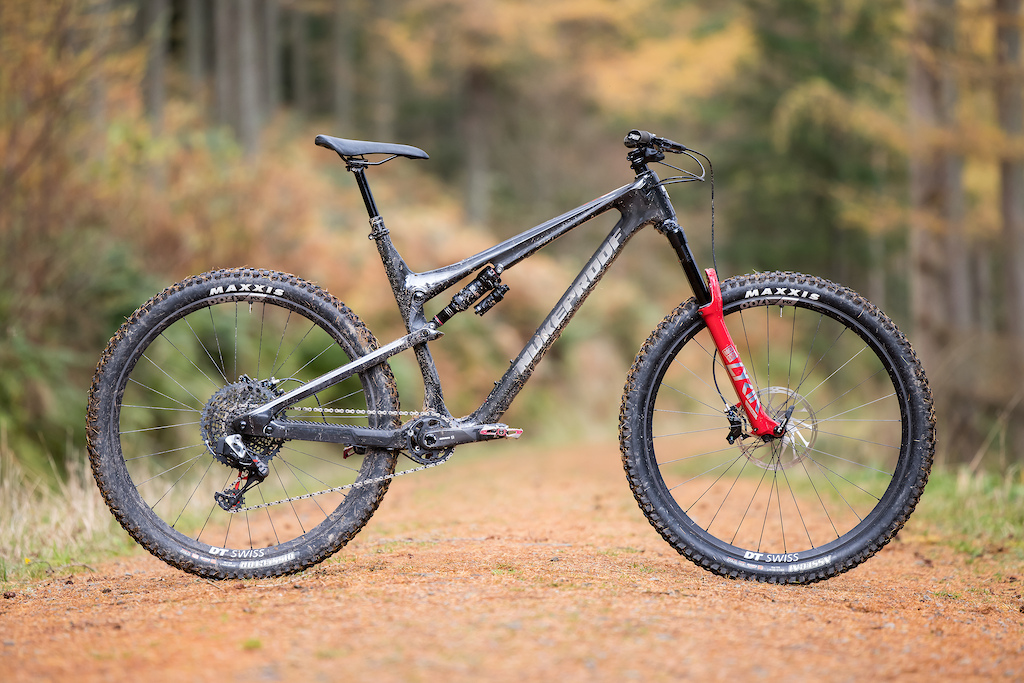 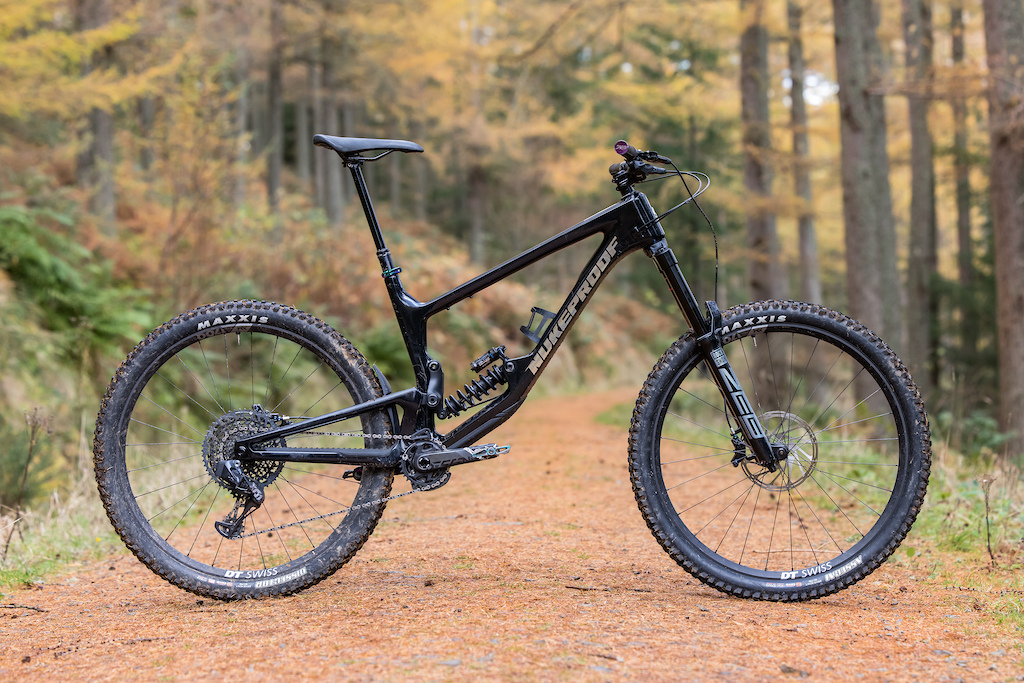 To make things as comparable as possible, I got hold of a Nukeprof Reactor RS and a Nukeproof Giga RS. The Reactor has 130 millimeters of rear travel and 150 millimeters up front, while Giga serves up 170 millimeters (rear) and 180 millimeters (front). These models have identical brakes, drivetrains, and cockpits. With the same wheels and tires fitted, only the frame and fork are different. Both use full-carbon frames and RockShox Ultimate-level suspension. The Reactor has a Lyrik fork to the Giga’s Zeb, but the difference in chassis diameter is appropriate to the travel offered in each case.

Although the photos used here were taken with a coil shock fitted to the Giga, the testing was carried out with a RockShox Super Deluxe air shock to match the shock on the Reactor. I upgraded the rear rotor size on the Reactor to 200 millimeters so both bikes could accept the same wheels for comparative testing.

I set both bikes up with 30 percent shock sag and suspension settings as I would normally have them.

For the most part, I used the wheels that came stock on the Reactor for both bikes to remove the variable of tire choice. These tires were a Maxxis Dissector, EXO+ casing, MaxTerrra compound (rear) with a Maxxis Assegai, EXO casing, MaxxTerra compound (front). For brevity, I’ll call these the “trail” tires from now on. Fitting these tires and the air shock to the Giga dropped its weight to a respectable 15.2 kilograms – only 800 grams (1.8 pounds) more than the Reactor with the same wheels.

I also tested with a stickier pair of tires (fitted to another alloy wheelset for easier wheel swaps). These were a Maxxis Assegai in DoubleDown casing, MaxxGrip compound on the rear, with a Schwalbe Magic Mary, SuperGravity casing, Soft compound, on the front. We’ll call these the “enduro” tires. These wheels/tires weighed 600 grams more than the trail wheels/tires. 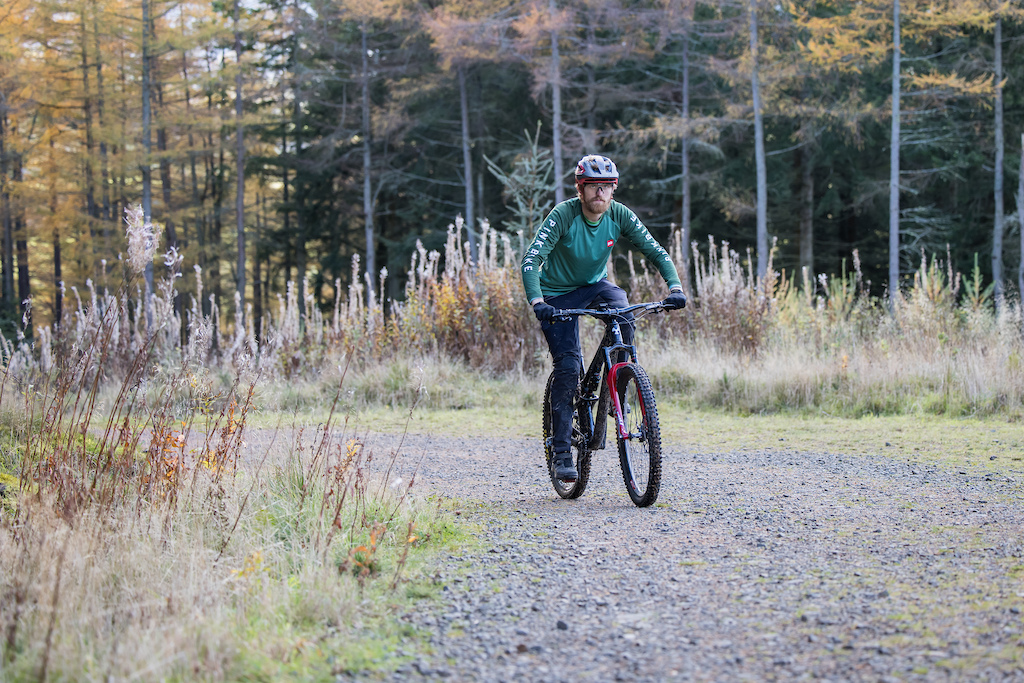 For the climbing test, I used a pair of SRM power meter pedals to control my effort, which I kept at a steady 250 watts. I rode both bikes up the same gentle and smooth fire road climb. I used a short climb so I could do five laps on each bike in quick succession and take an average. If I only did one or two longer climbs on each bike, there would be no way of knowing if any difference in times was down to the bike or just a fluke.

I did this first with the trail tires at my usual riding pressures (23 and 26 psi) then I re-tested the Reactor with the enduro tires. Here are the times:

But even if we take the 0.8 percent difference at face value, that’s about what we’d expect from the weight difference between the two bikes alone, suggesting the travel per se (i.e. the pedaling efficiency) wasn’t having any effect.

In contrast, with the enduro tires fitted, the Reactor went 4.1 percent slower, or 3.4 percent slower than the Giga with the trail tires. In both cases, these are statistically significant differences, because the Reactor with Enduro tires was consistently slowest. To give that some context, over a half-hour climb, the enduro tires would add about one minute and fourteen seconds to the Reactor’s time. Or to go at the same pace, you’d need to produce about 260 watts instead of 250 watts; if you’re already working hard, that could be very noticeable.

The added weight of the heavier tires would only be expected to slow things down by at most 0.6 percent, so most of that difference is down to rolling resistance. This added drag will make covering ground slower on the flat and even downhills too (so long as traction and braking aren’t what’s limiting speed).

Subjectively, you can feel a little pedal bob from either bike, but there isn’t dramatically more with the Giga. The position is quite different due to the Reactor’s lower stack height and slacker seat tube angle (74.5 degrees vs. 78 degrees); this stretches out the spine which feels much less comfortable to me, especially on long climbs. Doing timed testing over technical climbs is virtually impossible because the time can vary so much from one run to the next depending on line choice, technique and luck, but when riding over bumpy terrain the Giga is noticeably smoother. The softer suspension obviously helps here but having your weight further in front of the rear axle also reduces how much your weight lifts when the rear wheel moves over a bump. Though I can’t put a number on it, I much preferred the Giga for technical climbs. 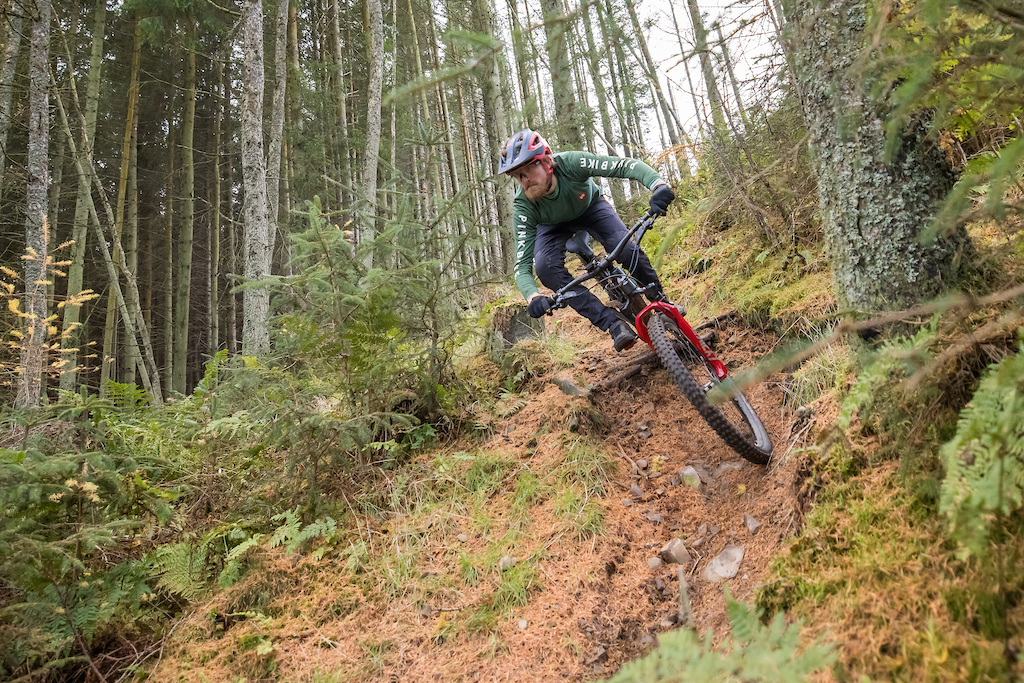 To see how they compare for descending, I chose a short local trail I know well with a good mix of roots, rocks, steep twisty sections and flat fast sections. It’s not the most technical trail in the world and it’s definitely not the roughest, but on the day of testing (which was a couple of days before taking these photographs), it was wet and slippery, making it a good challenge. To level the playing field and keep things simple, I stuck with the trail tires on the Giga and the enduro tires on the Reactor.

The Giga went first, and despite doing two laps to get up to speed on the course before getting the timer out, I shaved 2-3 seconds off my time from one run to the next. This is always a problem with timed testing. My first time on the Reactor (my fourth timed run of the day) matched the first run on the Giga. It improved from there but levelled out at one minute and sixteen seconds.

I did one more run on the Reactor with the trail tires and matched my fastest times, suggesting the stickier tires weren’t much of an advantage on this course anyway. I’m sure that on a more treacherous course—or in the hands of a rider who is better at finding the limit of grip—the enduro tires would become a significant advantage. 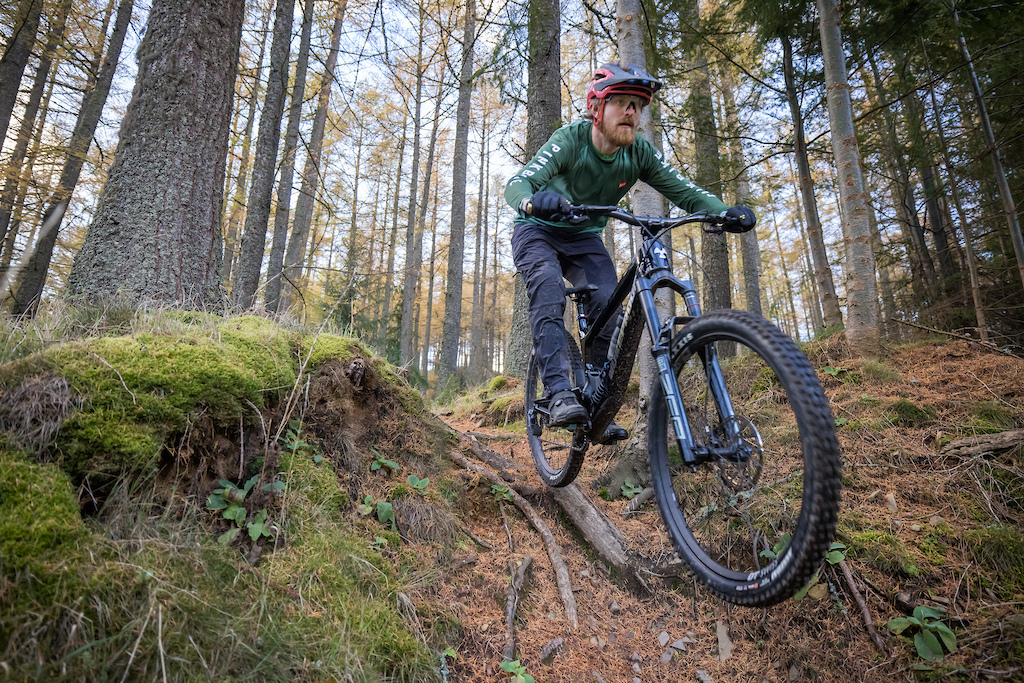 Subjectively, the enduro tires felt much more damped and surefooted and I was locking up less on the steep sections, but this didn’t seem to translate into more speed for me. Even with the sticky tires on the Reactor, the Giga felt much smoother, calmer, and more stable. The higher bar and slacker head angle combined with suspension that feels more settled “in the travel” makes going faster feel more within my comfort zone. I also felt like there was more time left on the table with the Giga, whereas the last two runs on the Reactor would be hard for me to improve on.

Because there are so many variables at play when descending, I wouldn’t read much into the times themselves. But they reveal that, although I felt closer to the edge on the Reactor, I was in fact going slower. 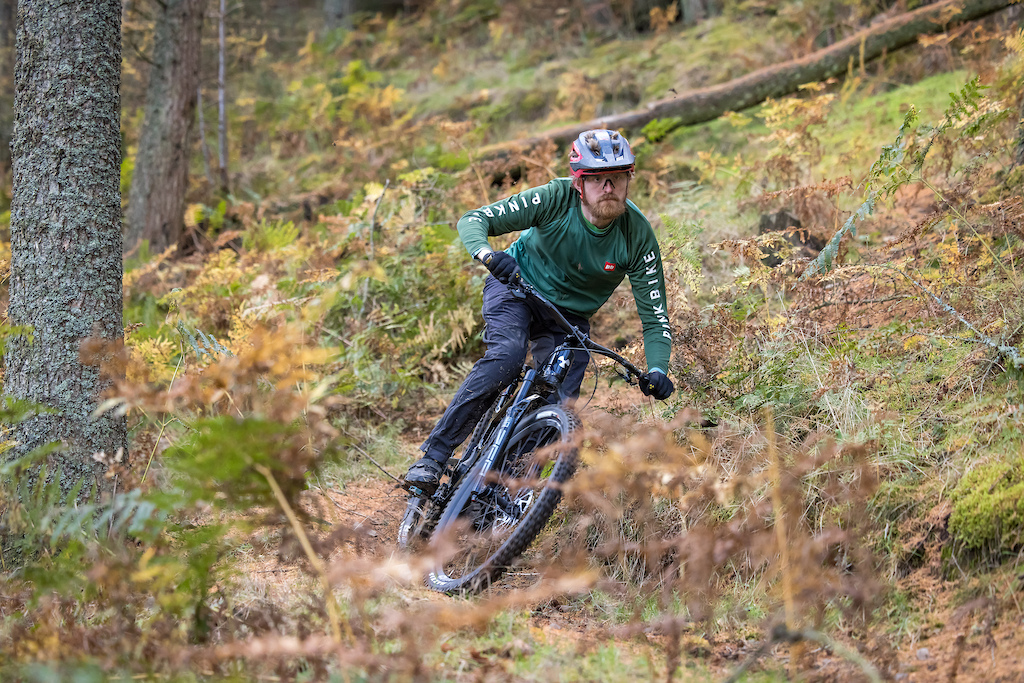 The biggest takeaway for me is just how much difference tire choice makes for climbing speed. Sure, the enduro tires I tested are pretty draggy, but they’re not DH tires or mud spikes, and the trail tires (with an Assegai up front) are far from the fastest you can get. In fact, they held their own even on slippery descents.

I’m sure plenty of people don’t care about going slightly faster or feeling more comfortable on steep descents; in fact, I often hear people say they find it more fun to have a sketchier ride at slower speeds. But if that’s the case, why not fit slicker tires which will offer a real boost in climbing speed as a bonus? You could always use the lockout or run 10 percent sag if you want your enduro bike to feel sketchier! Personally, I have more fun on a long travel bike as it gives me the confidence to try new lines or ride them with more commitment.

The other surprise was that the Giga was barely slower uphill than the Reactor with the same tires, and if you want to close the efficiency gap even more you could always use the lockout.

One caveat here is that a power meter may not be the best way to measure and control effort in an efficiency test when comparing suspension efficiency. I discuss this with Mike Levy in this episode of the Pinkbike Podcast, but the bottom line is that I think the power meter method is valid for measuring efficiency when pedalling sitting down (as in this test), but it doesn’t work for out-of-the-saddle sprinting, and that’s where the extra travel is more likely to be a disadvantage.

It’s also fair to say the Reactor isn’t the fastest-climbing short-travel bike out there. But the Giga probably isn’t the most efficient among 170 millimeter+ bikes either. It’s based on a downhill bike and it’s designed to be even more gravity-focussed than Nukeproof’s Mega enduro bike. More to the point, it doesn’t have a huge amount of anti-squat, and higher anti-squat levels would probably make it climb even better. In one of Levy’s efficiency tests, the 170 millimeter-travel Santa Cruz Nomad (which has quite a lot of anti-squat) was faster than the 130 millimeter Ibis Mojo (despite having slower tires), suggesting a long-travel bike with generous anti-squat can be as just as efficient as a shorter travel one.

The bottom line is that ample suspension travel needn’t be a hindrance uphill, but grippy tires will slow you down a lot. So if you want one bike to do everything, it might make sense to pick a long-travel bike with a spare set of fast-rolling tires for mellower rides.

This article first appeared on our sister site, Pinkbike.

New Bikepacking Gear to Help You Get Off the Beaten Path